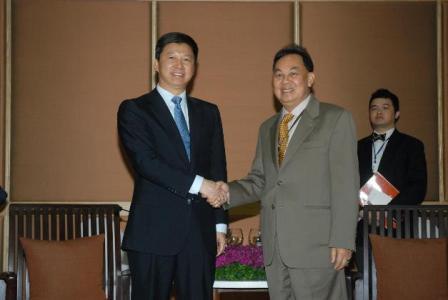 In the meeting with the Vice Deputy Foreign Minister, both sides congratulated the 35th anniversary of the Sino-Thai diplomatic relations. Foreign Minister Kasit reiterated Thailand’s intention to strengthen cooperation with the PRC in broader aspects, particularly in the areas of people-to-people contact, and others such as regional connectivity, SMEs investment promotion, creative economy, education, and joint research.

Regarding the current situation of severe drought in Mekong River, Mr. Song emphasized that the PRC had also been affected by the drought like other downstream countries.  With common interests they all share in the River, Mr. Song insisted that the PRC would never do any harm to the downstream countries and would provide them with necessary information to create mutual trust among the Mekong’s riparian countries.  On the Thai side, Foreign Minister Kasit expressed his appreciation to the PRC for its willingness to provide the MRC with related information about the Mekong River on regular basis, which was a good sign to all riparian countries that their cooperation in the Mekong River can be developed to a higher level. He hoped that such friendship from the PRC on this matter would continue and further enhance in the future.

In the meeting with Mr. Nyan Win, his Myanmar counterpart, Foreign Minister Kasit stated that the ownership of the Mekong River should be realized by all six riparian countries in order to jointly save the river for the sustainable usage.  The Myanmar Foreign Minister supported this view and said that specialized agencies were needed to keep track of all concerned scientific data that would be beneficial for finding real causes of the drought and proper solutions in the future.