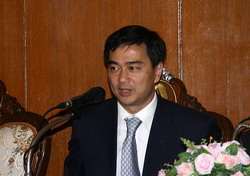 On 20 March 2010, a caravan of demonstrators of the so-called “red shirts” led by the United Front for Democracy against Dictatorship (UDD) moved through Bangkok's main thoroughfares, as police facilitated traffic flows. The mobile rallies proceed largely peacefully as the demonstrators returned to their major rally point on Radjadamnern Avenue in Bangkok.


Earlier, Prime Minister Abhisit Vejjajiva, speaking in a television interview, stressed that it is the Government's duty to carry on its administrative work and address difficulties facing the people.

Asked about how to resolve the present situation, the Prime Minister reiterated his stance that he has no problem with engaging in dialogue with protest leaders, having responded positively to what the National Human Rights Commission (NHRC) had proposed after the NHRC's meeting with protest leaders.  Given former prime minister Thaksin Shinawatra's rejection of the NHRC's role as a link between the Government and the demonstrators, it remains unclear who would make the decision for the demonstrators to join such a dialogue. Nevertheless, Prime Minister Abhisit urged that if their true aim is for democracy, the protest leaders should come to the dialogue.  The decision to proceed should be for the people, taking into account the overall public interest, not just those of the Government or the demonstrators.  In particular, it cannot be about Mr. Thaksin, as the court rulings and on-going legal proceedings against him are not simply matters between people but between the said individual and the state.

Expressing his views about the dialogue, Prime Minister Abhisit said that it should proceed under the rules of the Constitution, namely that the demonstrators can continue their rallies peacefully, and that there would be no blockades of government offices and important places, or of private residences.  He also accepted the people's rights to make political demands and criticise him or his Government but found certain expressions aimed at inciting hatred or undermining harmony and solidarity among Thais inappropriate, as these could worsen the situation.

In addition, both sides should discuss the fact that certain matters raised by the demonstrators were not real issues, in particular the issue of a class division, which could only escalate the conflict and hatred among the people which is not to anyone's interest.  Such a division, as the rhetoric goes, between the so-called “amataya”, or aristocrats, and the “phrai”, or commoners, no longer exists.  Under the Constitution, everyone is equal although economically and socially, disparity remains.  The equality which should prevail is, on the one hand, equality before the law, whereby those convicted by the court, like Mr. Thaksin, should serve their sentences accordingly, while on the other, economically, opportunities should be created.

The Prime Minister also added that the dialogue may also address the issues about time-frames and amendment of the present Constitution.  Finally, addressing the legitimacy issue, Prime Minister Abhisit said that his Government assumed office under the same rules of the present Constitution as his two predecessors, which were supported by the UDD. He further noted that after the main party, which won the most votes in the 2007 elections, was dissolved for election fraud, those rules have become unacceptable from the demonstrators' perspective.

The Prime Minister also noted that he has never insisted that his Government complete its term in late 2011, and that he remains open to other viable options, but to dissolve the House at this stage would not solve the problem.

With the prospect of prolonged demonstrations, the security agencies are assessing the necessity of extending the use of the Internal Security Act (ISA) beyond the period earlier approved by the Cabinet, which ends on 23 March 2010, but with less areas covered, in order to enable security officers to effectively carry out their duties.  Be that as it may, measures under the ISA would be as necessary and, as has been evident on previous occasions and over the past week, would not unduly affect the public, but would ensure public safety.

For tourists visiting or planning to visit Thailand, it should be noted that the demonstrations have not affected popular tourist destinations, particularly those outside of Bangkok, nor the safety of foreign tourists as foreigners have never been targeted in the on-going political conflict.  The country's transportation system, including all its airports, operates normally. The Government has made it clear that while respecting people’s constitutional right to peaceful assembly, the authorities would take action, in accordance with international standards, should the demonstrators attempt to blockade government buildings or key locations.  The Government will continue to monitor close the situation and step up measures, as necessary, to ensure public safety, including that of foreign visitors.

At the same time, members of the public are advised to remain vigilant, particularly in areas where protesters may gather, and occasional traffic congestions could be expected in certain parts of Bangkok.  The Tourism Authority of Thailand (TAT) has a 24-hour English language hotline at 1672 to provide tourists with further information.  The tourist police can also be reached at 1155.

(update from the information provided by the Ministry of Foreign Affairs of Thailand, 21 March 2010)