Enhancing Cooperation with the business sectors of Lower Austria

The Ambassador highlighted investments opportunities for Austrian companies especially in the 12 industries of EEC. Foreign investors can enjoy many investment incentives such as exemption of Corporate Income Tax (CIT) up to 13 years. Austrian companies from automotive and energy sectors can benefit from these new incentives. SMEs companies can also receive investment incentives for EEC area. Recent examples of Austrian investments in Thailand include Lenzing AG which is building its lyocell fibre plant in Thailand at Industrial Park 304 in Prachinburi Province. Gussing Renewable Energy GmbH has been successful in constructing a carbon-neutral waste gasification plant in Nong Bua, Nakornsawan Province. Dlouhy company, which is an Austrian SME producing ambulance equipment and parts and ambulances, is successfully increasing its trade with Thailand. These Austrian investments reflect trust, confidence and the belief of Thailand as a strategic and attractive location for investments even without any FTA agreement.

Thailand is developing industries 4.0 based on innovations. Thailand would like to learn from Austria in innovation, technology and research such as in the fields of clean technology, smart agriculture and smart farming, organic farming. Dr. Moser informed the Ambassador that the Economic Chamber of Lower Austria will fully support the Embassy in promoting investments in Thailand by Austrian companies in Lower Austria as well as any future Embassy’s investment promotion activities. Under agriculture sector, Lower Austria is also famous for its high quality white vine production. These SMEs give importance to R&D to increase the value of their products. To provide more information, the Ambassador gave an information kit on Thailand’s investments promotion policies and EEC to Dr. Moser.

In addition, both sides also exchanged views and information on a wide range of topics, including: bilateral cooperation in trade, innovation and smart city, Thailand’s Chairmanship of ASEAN and the key deliverables which were achieved during the 35th ASEAN Summit and Related Summits such as the conclusion of RCEP Agreement, resumption of Thai - EU FTA negotiation and Thailand’s innovative tourism policies integrating a deep understanding of Thai culture and local way of life.

Lower Austria, the largest federal state of Austria, is about 90 kms from Vienna. Lower Austria is considered an economic powerhouse and in 2017 contributing 15.8 percent to Austria’s overall GDP. Some of the major industries are metal and technology, machinery and plant construction, music, sport and leisure technology, food and feed technology. In addition, many world-class research institutes have made Lower Austria their headquarters such as MedAustron, Institute of Science and Technology (IST) and Austria Institute of Technology (AIT). 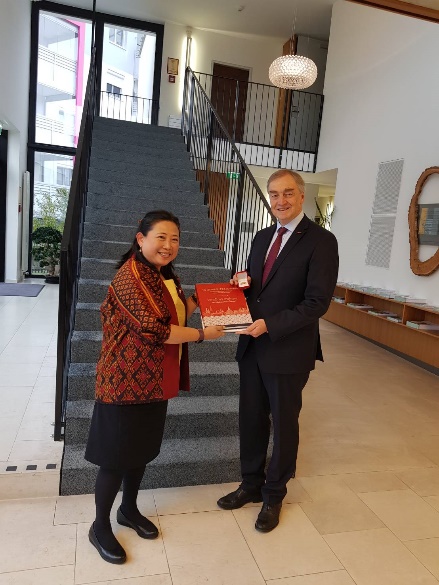