The Prince Mahidol Award Foundation was established in 1992 to commemorate the Centenary Birthday Anniversary of His Royal Highness Prince Mahidol of Songkla, the father of His Majesty the late King Bhumibol Adulyadej of Thailand and the grandfather of His Majesty King Maha Vajiralongkorn Bodindradebayavarangkun of Thailand. After graduating from Harvard Medical School, His Royal Highness Prince Mahidol of Songkla dedicated his life to the advancement of medical and public health services in Thailand. He was subsequently named “The Father of Modern Medicine and Public Health of Thailand” in recognition of his contribution.

The “Prince Mahidol Award” is conferred annually upon individuals or institutions that have demonstrated outstanding and exemplary contributions to the advancement of medical and public health services for the betterment of society. The prizes consist of a medal, a certificate and US$ 100,000. All nominations are strongly encouraged to submit online at www.princemahidolaward.org by 30 June 2021. 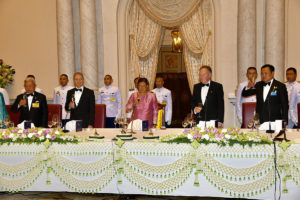 1)  All nominations can be submitted by three methods:

strongly encouraged to use this method. >>>  ONLINE SUBMISSION  <<<

(3)  Regular mail delivery. Please send the complete nomination and all supporting materials to:

2)  Nominations must be received no later than midnight local time on June 30, 2021.

3)  Nominations that arrive after the deadline will be held over to the following year for consideration. Nominations that did not result in an award can be resubmitted or updated in subsequent years.

4)  Self-nominations are NOT ACCEPTED.

For more information about the submission process, please contact pmaf@mahidol.ac.th